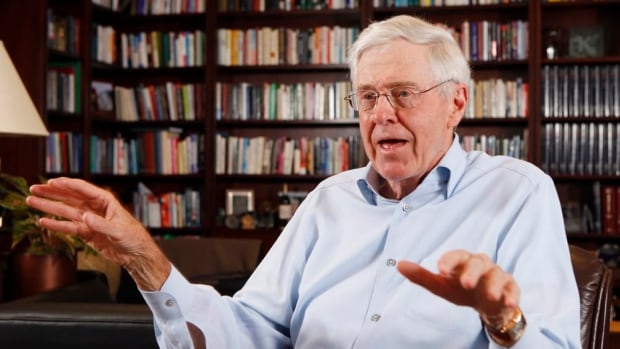 The Manitoba government has sent large school tax refund checks to businesses owned by billionaires on a list of some of the world’s richest people, according to a CBC News analysis.

This includes Charles Koch, who can thank the Province of Manitoba for at least $80,414 last year – the rebate sent to the Koch Fertilizer Canada plant in the southwestern Manitoba town of Brandon.

Koch is currently the 21st richest person in the world and has seen his $38.2 billion fortune grow to $60 billion in the past two years, according to the Forbes list of billionaires in real time.

“Property tax refunds to the wealthiest homeowners are an incredibly inequitable use of public funds, especially when there are so many other pressing needs,” said Alex Hemingway of the Canadian Center for Policy Alternatives.

Hemingway, the think tank’s senior economist, says billionaires and big business have done “extremely well” during the pandemic, at a time when many workers were out of work. The Center research suggests the wealth of billionaires in Canada increased by $78 billion in the first year of the pandemic.

When the Progressive Conservative government announced a refund of a percentage of tax collected to fund K-12 education in 2021, it said the intention was to put money back in their pockets families struggling to make ends meet and helping seniors and small businesses. .

The rebates totaled $246.5 million in 2021, according to the province’s latest budget document, and $350 million this year, at a time when the province is running a deficit.

This has led to discounts for some companies owned by Canadian billionaires, as well as companies like Koch Fertilizer Canada.

Canadian cheese tycoon Emanuele (Lino) Saputo and his family are currently worth $4.8 billion, up from $3.8 billion in 2020, according to Forbes. He and a member of his family hold 42% of the common shares of Saputo Inc., according to TSX 2022 Filings.

Neither Koch Fertilizer Canada nor Saputo responded to a request for comment.

In Winnipeg, True North Square got a property tax refund check for $259,709 in 2021, according to records obtained through a Freedom of Information request, making it the third-highest amount issued in the city.

True North Square is co-owned by David Thomson, who is listed, along with his family, as the 26th richest in the world by Forbes, which claims their fortune has risen from $31.6 billion to $49.2 billion between 2020 and 2022.

The company says it had to use the rebate to pay for the development of the True North plaza, which received $11.95 million in tax increment funding of the province in 2018.

The TIF is a form of government grant intended to stimulate development. It allows owners to avoid paying increased taxes up to a specified amount when building a project that is worth significantly more than the previous structure on the site.

“One hundred percent of the refund was used to fund the provincial TIF [tax-increment financing] bonds” and “no money has been paid to the TN Square ownership group,” wrote Gavin Johnstone, vice president of True North Real Estate Development Ltd., who spoke on behalf of the real estate arm of Thomson, Osmington. .

“The province is reducing the annual TIF grant payment by the value of the education property tax rebate applied to the project property. This reduction is being done to avoid double payment to a property owner,” wrote a gatekeeper. word of the Ministry of Finance in an e-mailed statement. Monday.

Members of the Canadian Federation of Independent Business, which represents small businesses, are “overwhelmingly” happy with the rebate, said Manitoba provincial director Kathleen Cook, because most members are also owners.

But there is some discontent among commercial tenants who have not received part of the discount from their landlords, she said.

“They rent out their business premises and presumably pay property taxes through their rental fees, but they don’t necessarily see the property tax refund passing through to them.”

The business federation recently sent a letter to Finance Minister Cameron Friesen asking if there is a policy or remedy for commercial tenants who do not receive their share of the property tax refund.

It comes after Scott Fielding, the province’s former finance minister, said earlier this year that commercial tenants are getting a share of the refund.

“Under the terms of commercial leases, tenants pay all property taxes, and rebates are to be paid to tenants,” Fielding said during Question Period in the Legislative Assembly on May 17, referring to a letter to the editor which had been published in the Winnipeg Free Press.

Friesen was unavailable for an interview for this story and his publicist, Eric Bench, did not provide a direct response when asked about CFIB members’ concerns.

The refund is intended to “make life more affordable for all Manitobans” who are “feeling the pressure of rising costs,” Friesen’s publicist wrote in an email.

Bench did not respond to a question about how money spent on education property tax rebates will be replaced in the province’s coffers, but he said the government is taking a “cautious approach and disciplined to manage expenses”.

The projected deficit of $548 million for 2022-23 “is not attributable to the rebate or any other specific decision or program,” Bench wrote.

However, CCPA’s Hemingway says this is a continuation of a “long-standing” trend toward extreme wealth inequality in Canada.

“We’re talking about adding fuel to the fire of this kind of inequality by giving public rebates and public dollars to the richest,” he said. “It really doesn’t make any sense.”