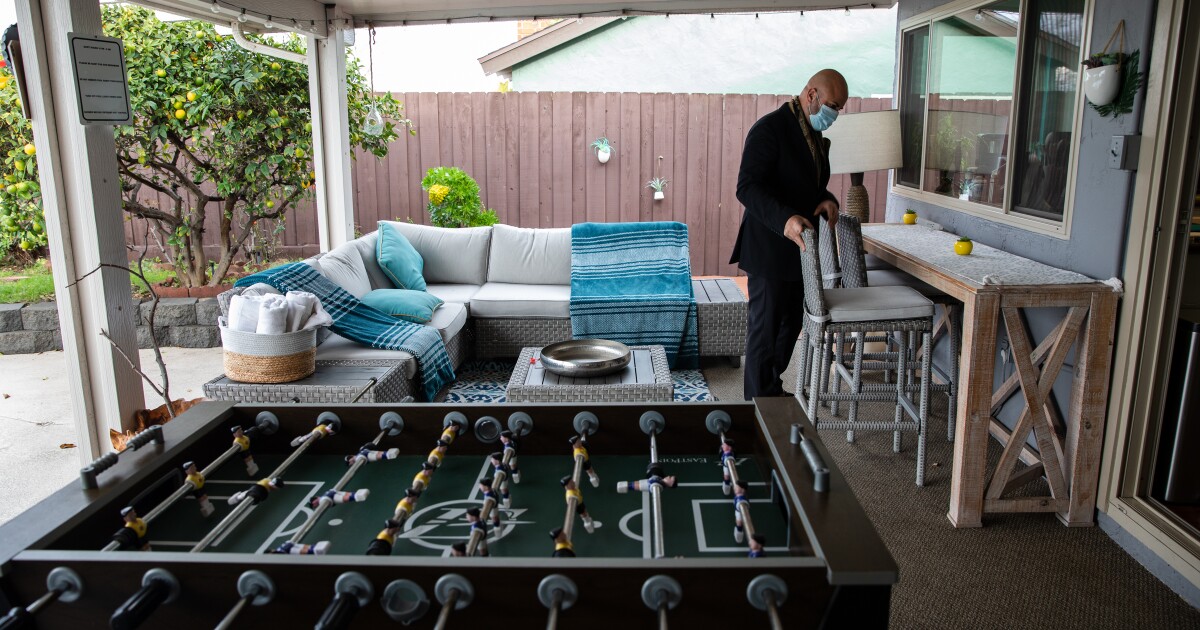 In October, Navid Namdar found a flyer on social media promoting free admission to a Halloween party. He became enraged when he read that it would be held at his short-term rental in Chula Vista.

“It was a big party with 25 to 30 people,” said Namdar, a Chula Vista resident and Airbnb operator whose property was listed to accommodate a maximum of nine people. “There were huge loudspeakers in the garden and they parked all over the neighborhood. It was so bad.

Fortunately, he said, he lives close to the rental and was able to interrupt the party. But he worries about properties where the hosts are not local residents.

That’s just one problem the City of Chula Vista is looking to address in a series of new rules for short-term rentals that go into effect Feb. 1. The order is intended to support good business providers, but penalize violators.

The ordinance approved last month by the city council includes the following rules:

Penalties for violating the ordinance, including if occupants engage in loud and disorderly contact between 10 p.m. and 9 a.m., include fines ranging from $100 to $2,000.

“(Having a code enforcement officer) is really designed for a few known bad actors who cause trouble,” said Chula Vista resident and host Aaron Davitian.

He and Namdar, along with other local hosts, said they worked with the city to shape the ordinance. Many of their suggestions came from feedback from their neighbors.

“When I spoke to some of these neighbors, I really had a heart for what they were going through. No one should have to live next to a party hotel,” said Davitian, who is a resident local for about 18 years and lives near his short term rental.

A city survey showed that of about 110 respondents, 57 strongly opposed the city allowing short-term rentals in their neighborhoods. The majority of participants were local owners.

Davitian said the neighbors, some of whom have considered moving due to nuisance activity, “just want to see the results now that the ordinance has been passed, and until a code enforcement officer is hired, they won’t see it”.

As it stands, the hosts said the ordinance helps establish a framework for best practices and tackles rule breakers with appropriate penalties. The ordinance also includes “good neighbor” rules of conduct, which require the identification of a local contact person who is always available by telephone to respond to complaints or emergencies.

The ordinance will go into effect Feb. 1, except for all permit requirements “to allow time for current operators to come into compliance with permits,” according to a city staff report. On July 1, permit enforcement will come into effect.

Mayor Mary Casillas Salas expressed concern about a potential increase in short-term rentals and the impact it would have on the city’s housing stock.

“The pressures are real in the housing market,” she said. “We don’t have that issue now, but the Bayfront is coming, and as we see the popularity of that happening, there’s going to have to be a time when we have to review and review the caps on that.”

To date, Chula Vista has a short-term rental inventory of between 300 and 500, according to city staff.

Third Avenue hosts, some neighbors and local businesses said they see benefit in having a strong supply of short-term rentals with the arrival of the Bayfront project, which includes a hotel and convention center in a billion dollars.

“I think short-term rentals are part of a really good ecosystem that can nurture our community with a lot of tourist dollars that would normally go to San Diego,” Davitian said.

After a year, the city plans to evaluate the ordinance and its potential impact on local industry.