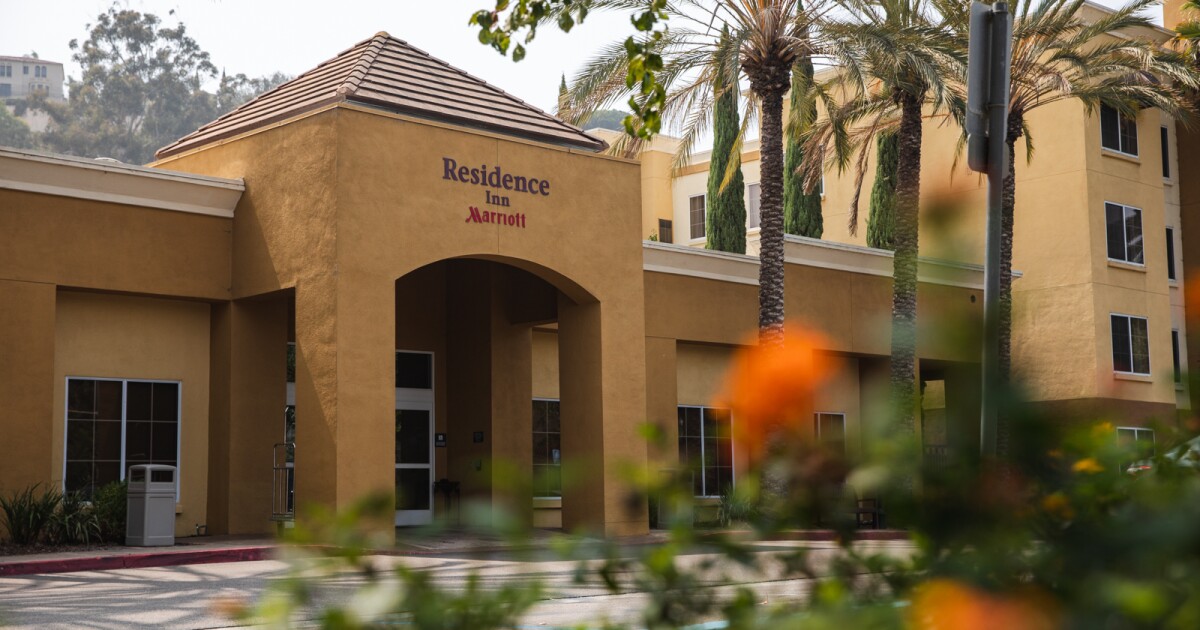 The city is suing real estate brokers who advised the San Diego Housing Commission to acquire two serviced apartments in Mission Valley and Kearny Mesa to house homeless people during the COVID crisis.

The lawsuit comes six months after city officials defended the two hotels’ purchase prices, which were among the highest per-room costs of any hotel sold in the area last year.

“The facts of this case are appalling, and City Council is determined to uncover how millions of public dollars were spent,” Elliott said in a press release.

Officials from both companies and Neil did not respond to requests for comment on Tuesday.

According to the city attorney, Kidder Mathews and Neil made fraudulent statements to the housing commission, violated conflict of interest laws and had a prohibited financial interest in one of the contracts in which they participated.

“The housing commission brokers created a stock market bonanza on top of more than $1 million in commissions as their client tried to protect hundreds of homeless people from a devastating pandemic,” Elliott said, referring in the city.

The lawsuit involves a pair of Residence Inn hotels that the city purchased last November, more than eight months after the coronavirus pandemic began.

The San Diego Union-Tribune reported in February that the city appeared to be paying well above market rate for each property, a 144-room resort in Kearny Mesa and a 192-room property in Mission Valley.

The idea was to use the hotels to protect the homeless from COVID-19 by relocating them from a makeshift shelter set up inside the San Diego Convention Center to more permanent, supportive housing. .

Per-room costs for each of the properties were among the highest of any hotel that changed hands in San Diego County last year. The Mission Valley Hotel sold for $349,000 per room and the Kearny Mesa Hotel for $274,000 per room.

The San Diego Housing Commission relied on CBRE’s appraisals that the Hotel Circle property was worth $68.1 million and the Kearny Mesa Center was valued at $39.6 million.

Reports noted that the COVID-19 pandemic had sharply reduced the value of hotels.

The city paid $67 million for the Mission Valley Hotel and $39.5 for the Kearny Mesa property. County records showed the hotels were then worth $63.4 million and $28.9 million, respectively.

City officials used a series of state and federal grants — and a $50 million loan from Chase Bank — to seal the deals.

“If the appraisals conducted for Chase Bank had not supported the value and purchase price of the properties as indicated in the CBRE appraisals, Chase Bank could not have legally funded its loans,” Marshall told AFP at the time. Union-Tribune.

The housing commission did not respond to follow-up questions on Tuesday, such as why the city did not require disclosures before the escrow closed, why the city’s attorneys signed off on the purchases and why officials from the city initially defended the transactions.

The lawsuit filed by the city attorney’s office alleges that the acquisition costs of the two properties were inflated, in at least one case to justify a larger commission.

A spokeswoman for Elliott said the city attorney’s office never approved hotel acquisitions because the housing commission is an independent city agency that relies on its own legal advisers, the firm of attorneys Christensen & Spath of San Diego.

“Our lawyers have no independent knowledge of SDHC’s work product, attend open or closed sessions of the Board of Commissioners, or advise its staff,” spokeswoman Hilary Nemchik said via email.

Walter Spath, one of the Housing Commission’s attorneys, said he was unaware of anything in the legal complaint suggesting Christensen & Spath had overlooked anything in Residence Inn transactions.

In February, Marshall also defended brokerage fees of more than $500,000 when asked by the Union-Tribune why the buyer was bearing the cost.

The “payment of the broker’s commission by the Housing Commission was part of the negotiations for the complex purchase of the Circle Hotel property, which included requirements for the seller to deliver the property to SDHC at the end of the term. escrow without any resident,” he said.

The city attorney’s office now says the fees paid by the city were inappropriate.

“Neil also earned commissions on the two trades that exceeded the $250,000 limit set in the signed brokerage agreement,” the statement said.

“In negotiating the agreement to acquire the Residence Inn Kearny Mesa, Neil took a $592,500 commission from the vendor, inflating the cost of the hotel at the expense of his client,” he added. “The housing commission paid Neil’s $502,5000 commission on the acquisition of the Circle Hotel, even though it went over the line.”

The city’s lawsuit comes about two months after a report by online news organization Voice of San Diego that Neil had bought tens of thousands of shares in the company that owns the Mission Valley hotel.

The value of those shares may have increased by as much as $250,000 since the sale, according to the city attorney’s office.

City attorneys said Tuesday that the state government code strictly prohibits public officials — and their agents — from participating in financial transactions in which they have a personal interest.

“Although they are consultants to public agencies, neither Kidder Mathews nor Neil have filed the legally required declarations of economic interest which would have disclosed their conflicts of interest,” the press release reads.

“They also failed to comply with the disclosure requirements set out in the brokerage agreement which would have exposed the conflicts and allowed the housing commission to use another broker,” he added.

The lawsuit does not seek to return the properties to the original sellers. Both Residence Inn properties would remain owned by the city, operating as supportive housing for those in need.

The lawsuit seeks regular and punitive damages for both the settlements and a court order voiding the Hotel Circle deal.

The case against the brokers and seller of the Mission Valley Hotel was announced just a month after Elliott filed a similar lawsuit against the owner of the city-leased skyscrapers at 101 Ash St. and at Civic Center Plaza.

That lawsuit said those two deals involved consultant Jason Hughes raising nearly $10 million for advising the city on lease-purchase agreements, even though he and former mayor Kevin Faulconer said the advice that he had given to city officials and the mayor were free.

The city attorney’s office announced the lawsuit a day after the Union-Tribune reported that the seller in both transactions, Cisterra Development, had paid Hughes $9.4 million in commissions.

Cisterra and Hughes both said city officials are aware of the payments for his efforts at Civic Center Plaza and 101 Ash St. The city’s case seeks to void each of the leases, which were approved in 2015 and 2016, respectively.