Tesla does it all for Austin: who are the real estate winners? 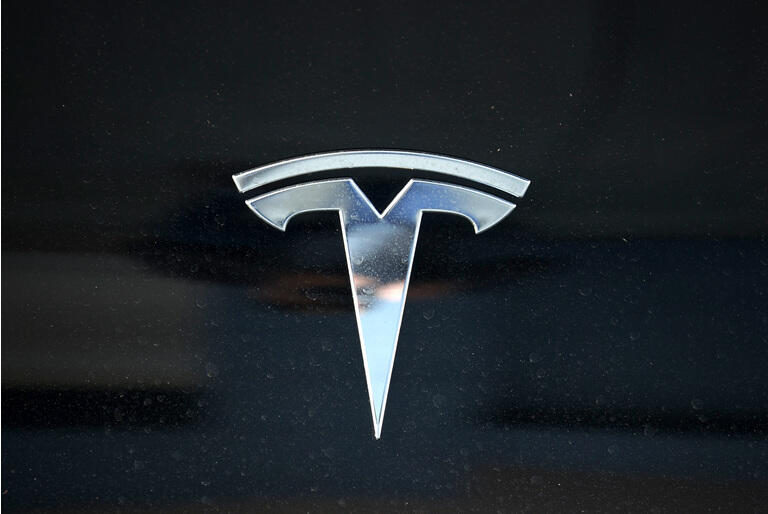 Although Tesla’s new Austin, TX Assembly Plant (TSLA) has been in development for almost two years, it got a lot more real last week at TSLA’s shareholders meeting when Elon Musk announced that the head office would also be moved to Texas.

Making full use of the Gretzky method of “Skating where the puck is going to be” we will identify the Austin / Round Rock MSA landowners. In a free form report, using the Portfolio Income Solutions property directory, we will attempt to cover the real estate sectors that are at least to most positively affected.

According to S&P Capital IQ’s measurement, REITs own 63 properties with over 16.4 million square feet of rental space. Austin had a significant number of vacant offices before the pandemic, and new listings have continued to appear online. While the stronger presence of Tesla and suppliers helps bolster demand base, offices will not experience the significant revenue growth in other real estate sectors. 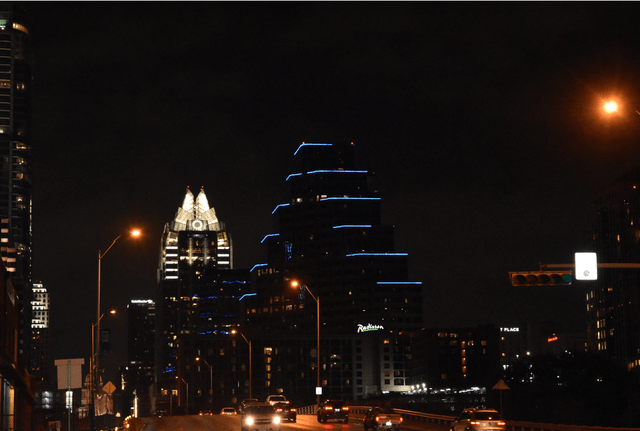 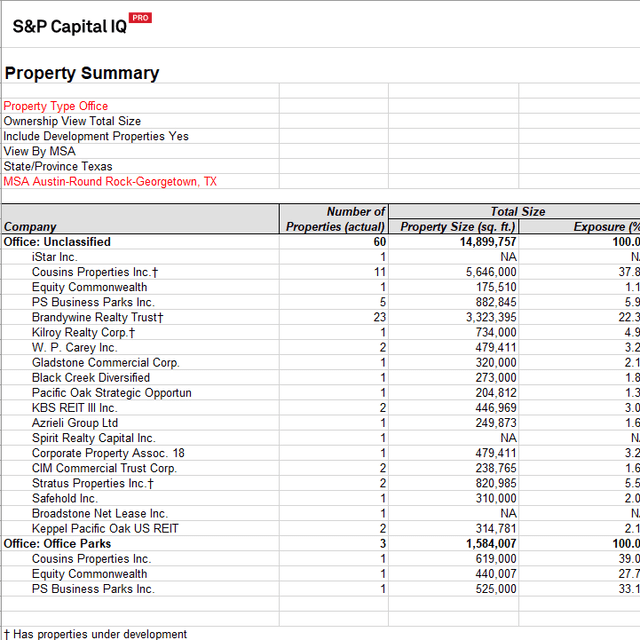 Commercial real estate is both diverse and ubiquitous. The United States is generally perceived to be overloaded, so it is helpful to be in markets that experience population migration and the resulting higher foot traffic. With relatively longer leases, commercial real estate is slow to respond to new positive demand. Vacant space in the Austin market will benefit from further demand; the renewal of the leases will benefit from the solid dynamics of the job market.

In this mix, Whitestone REIT (WSR) has 4 Austin properties. WSR will likely see an increase in leases and rents.

Austin has consistently ranked among the nation’s fastest growing populations and labor markets. The arrival of manufacturers like Tesla and its contingent of suppliers generates a strong demand for industrial / logistics space. Development may double the industrial space available in the Austin MSA over the next decade, but we have to remember that we are in Texas. Traffic is congested near the Capitol and the University of Texas at Austin, but the concentric rings outside the downtown area offer tens of thousands of acres for new industrial development. The industry will remain strong in Austin, but it will not be a breakout market. 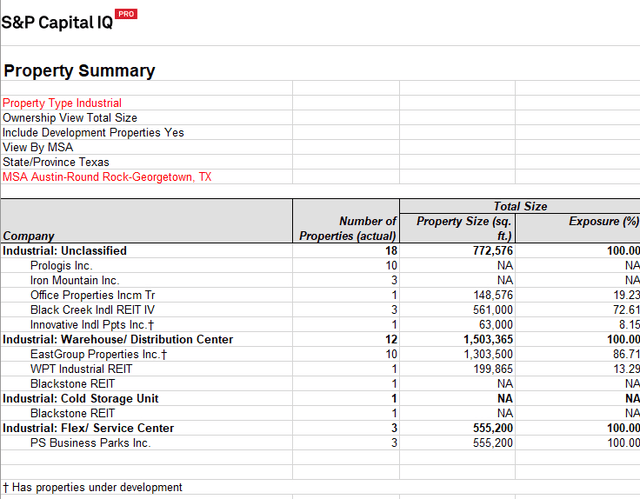 As always in S&P Global IQ reports, the presence of Prologis (PLD) is underestimated. My suspicion is that PLD is 3 years away, but not disclosed, in its development in Austin. 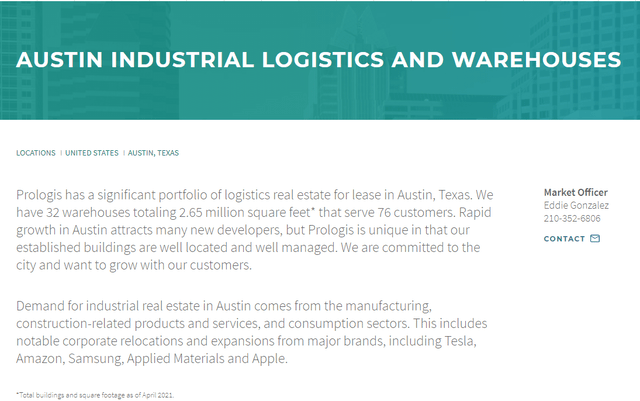 Finding a better quality of life for its employees is why tech companies like Tesla are moving to places like Austin. TSLA can pay an engineer $ 200,000 and she can afford the $ 450,000 house in Austin that would cost her $ 4 million in Palo Alto. Texas is also more affordable in tax terms than California for businesses and individuals. TX has no personal income tax.

Housing is where the real estate opportunity really begins to emerge in Austin. Sustained job growth has put Austin into a cycle where housing supply has struggled to keep up with growing demand. In a previous report, we discussed how single family home prices hit their peak. 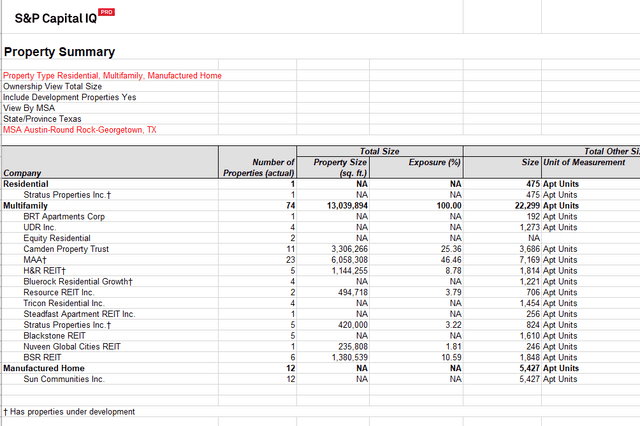 Mid-America Apartment Communities (MAA) and Camden Property Trust (CPT) have the lion’s share of multi-family homes in Austin. Surprisingly, MAA and CPT are focused on a dozen other markets as strong as Austin. Each company is trading at an FFO of 25 to 28 times the consensus, but with the new rents rising in double digits, those multiples will come down. MAA and CPT are fully valued but not overvalued. CPT long.

BSR REIT (OTCPK: BSRTF) has disproportionate exposure in Austin and is highly concentrated in Texas. It trades at a reduced multiple to CPT and MAA and is compromised by its listing on the Toronto Stock Exchange (HOM.UN) and its small market cap of $ 490 million. Another value. BSRTF long.

With more than 5,400 units, Sun Communities (SUI) is a serious player in the Austin housing market. SUI’s 12 properties in the Austin MSA are a combination of prefabricated housing communities, RV parks, and marina beaches. I have walked a lot on the trails that border Austin’s waterways; a motorhome or barge that gives you affordable access to the city’s rivers and lakes will be in constant demand. This is a very strong market in the SUI portfolio. 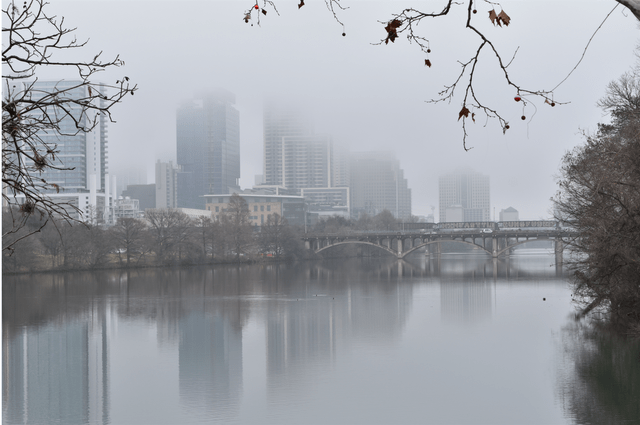 American Homes 4 Rent (AMH) has identified the most promising markets for single-family homes. Their presence in Austin is more or less the same. I suspect a lot of frustrated and potential Austin homebuyers will become renters of AMH homes. AMH’s portfolio of over 1,000 homes in Austin probably has a market value of 150% of the cost.

Austin is the city where people go for their new jobs. A new Tesla engineer can spend a month finding, buying and occupying a new house or apartment.

It is the city where a company pursues new business. Even in the era of COVID, companies still negotiate a supply or service contract with Tesla, in person.

Austin is not the city of business conventions. In this market, long-term hotels will have disproportionate demand for at least the next five years. 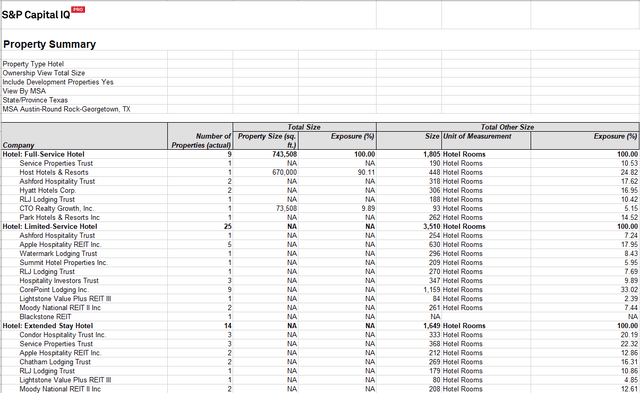 As the table describes, Apple Hospitality (APLE) and Chatham Lodging (CLDT) have an extended presence in Austin, but they are lagging behind the main operator. The table does not reveal that a unit of Blackstone, Inc. (BX) deprived Extended Stay America (nee STAY) earlier this year. Through this acquisition, BX owns 12 extended stay properties in the Austin market. The recent purchase by BX of the Condor Hospitality (CDOR) portfolio gives them ownership of the 3 Austin properties in the table above. BX has a lock in the Austin hospitality market. BX long.

All homeowners will benefit from Austin’s robust economy. Residential and hotel properties are the clear winners, but retail, healthcare, self-storage and other sub-sectors will benefit from increased profitability in migration and job growth trends. .